"JANITOR" - Two Hours of Silliness! - Plus a Jamboree and a Birthday Conference Call

I have not alluded to this in any way before today, but the things I have posted to this site, and the majority of what I posted to my "reel to reel catacombs" series at WFMU, tended to be things I came across in my ongoing purchasing and perusal of tapes - things I had heard recently, or had actively put aside for use on this site later. There were major exceptions - things I had owned for years, and which I knew I had to share, such as the Merigail Moreland material, some of the "voice talent" advertising compilations and the Larry Taylor tapes - but mostly I've been putting aside things as I heard them and populated this site with items I had put into my "digitize" stack - relative recent "finds".

However, for some time, I've thought that I really needed to dig into the large number of tapes I collected during the 20 years before I started blogging for WFMU, because there are dozens of wonderful finds there, which have gone unheard outside of my home, things I heard before I had any way to share them on a large scale.

So starting today, I'm going to try to share at least one of those tapes per post. For the most part, these should be quite stellar items, as they were the tapes I "kept" during the years when I was able to pick over my choices at the late, lamented ALS Mammoth Music Mart (i.e. it was easier to look at tapes and see which ones seemed promising, than it is on eBay...).

So it was that, last week, I went looking for a tape I recalled hearing perhaps 25-30 years ago, which I had labeled "JANITOR". After listening to this tape anew, and at the risk of underselling it, I think it's actually a somewhat inauspicious debut for this new phase of my site, as the tape is not quite as engaging or entertaining as I recalled. And yet....

And yet, it's a singularly weird and idiosyncratic recording, a solid two hours plus of a few friends performing skit after skit, sketches and fake funny phone calls and tons of low and fairly-low humor. The folks who made this tape clearly spent a lot of time on it, and that someone gave it up, and that it found it's way into my hands is remarkable. I suspect there's a considerable amount of "You Hadda Be There" to this - and having myself been part of dozens of recordings that I adore, where you probably "Hadda Be There", I can appreciate the tape for that aspect, too. And these people are having a good time, which is often worth hearing just for itself.

While the tape box gave no hint of its contents, inside the box was a ridiculously detailed list on a small, yellowing piece of paper. Side one is their presentation of "JANITOR: Going Places and Picking Up Things", and it is documented simply enough with eight bullet points, describing eight sketches heard on the side. Here is part of that document: 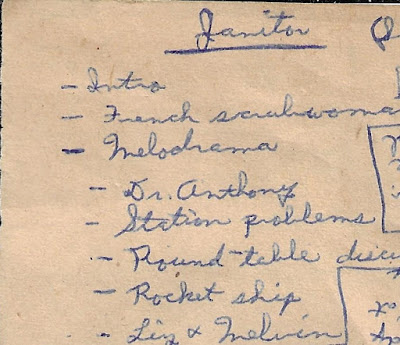 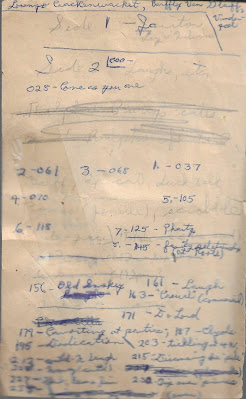 What's more, the first side of the paper, doesn't simply contain those few segments labeled "Janitor". Upside down from those listings, it contains the rest of the contents of side two, with over 30 separate bits documented. Here is what that side looks like from that orientation (please note the "Janitor" material (as scanned above) documented upside down at the bottom): That's 50-plus bits in just over an hour. I have not separated out the two sides, and this download/play option features the entire 125 minutes of both "Janitor" and "Laughs, etc.". There is a 40 second gap at the 62 1/2 minute point, and that's where side one ends and side two begins.

When is this from? Well the tape box is the pretty much standard Scotch mid-'50's design, so my guess is, mid to late 1950's. But that's just a guess.

Next, here's a neat little Audio Verite recording, made at some point in the 1962 or 1963 at a Boy Scout Jamboree, in Raymond Maine at Camp William Hinds. Among other things, you'll hear a song in tribute to the camp, a conversation with a visitor from Sweden, some more songs (almost group shouts, really), a performance of an old-style ballad of the "Dasterdly Dan/Helpless Maiden" genre, and a bit of a badge-awarding ceremony.

From a few years later on down the line - August of 1966 to be exact - comes something unique and very much of its day and age - essentially, the equivalent of a Zoom call in 1966. For here we have a group of friends offering happy birthday and best wishes to their friend Paul, on a conference call. Here's the tape box: 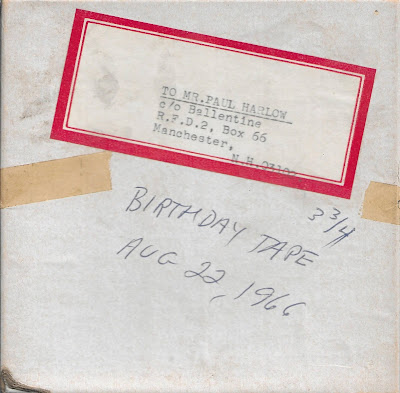 Paul's not actually on the call - the call was done in advance, in order to send the tape to Paul on his birthday as a surprise. (And not only Paul - everyone was to get a copy!)

And OH, the work that went into this! The person who set this up (Howard) is heard first calling the "conference call" operator and giving all of the phone numbers for the call, and when the call is to be made, a process which takes the nearly the first quarter of this 30 minute tape. Then there's the actual connection being made for the call, and finally, after nearly 8 1/2 minutes of audio, the conference call begins. From there on out, it's largely what you'd expect, and again, not terribly unlike a zoom call with everyone's cameras being turned off. A short bit from someone who couldn't be on the conference call is heard at the end. I hope Paul appreciated this.

Play:
~~
And finally, our "Very Short Reel" for the day. This three inch reel (which is barely 1/5th full of tape) has a box labeled as follows: 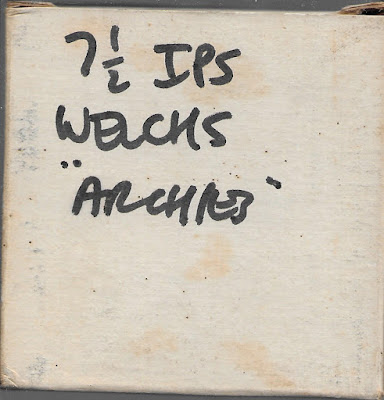 Okay, so I'm guessing that's "Welch's" as in the Fruit Juice company, rather than "WELCHS", but what is that second word? "ARCHIES"? "ARCHLES"? ARCH1e3"? I dunno. But what the tape contains is some uninspired production music, a piece of less than a minute, utilizing blues chords, complete with count in, applause and whooping at the end as if the participants think they just did something really special, and the briefest moment of conversation before the tape cuts off. A cute, and intriguing 40 or so feet of recording tape.
Download: "WELCHS"
Play:
Posted by Bob Purse at 10:25 AM