Today, we're going to run the gamut from religion to fatness, from Vietnam to car tires, all from a roughly ten year period, somewhere between 1962 and 1972, with a very brief side trip to 1950.

Since we're in the first few hours of Passover, I thought this would be the perfect time to share a tape I came across some years ago, and listened to again over the winter. It features recordings of two televised programs about - and featuring elements of the celebration of - Passover. My guess is that they ran during the same year, although I don't know that for certain.

I will largely let them speak for themselves. The first program on the tape, nearly exactly a half hour in length, features the Operatic and Broadway Tenor Jan Peerce, and comes from a series on NBC - one which ran without advertising - titled "The Eternal Light". This was a program which ran on radio, then television (while remaining on radio as well) for a total of 46 years.

The second program - about which I have discerned fewer details - features another Operatic Tenor, Richard Tucker, who sings at times. Between his singing, there is a presentation of a Seder at home, presented in a sort of educational fashion. This one's nearly three quarters of an hour.

For those of you who didn't want to listen to 75 total minutes of religious programming - and for everyone who did - here is something I find truly fascinating. It's a tape I just listened to for the first time yesterday. This features a Marine narrating an audio letter from Vietnam. The speaker is quite self-effacing and I find him extremely likeable. He is speaking to a family - the Schaffer (sp?) family - but specifies that it's easier to visualize himself speaking to one person, and so chooses "young Ruthie" as the focus of his comments.

The tape is punctuated a few times by such sounds as the unit phone ringing, the Marine's cohorts partying hearty somewhere nearby and a plane going over at low altitude, providing a level of verisimilitude rarely experienced in these sorts of recordings.

Starting just before the end of side one, and extending through the entirety of side two, he draws out a secret that he wants Ruthie to keep - a gift he is buying, presumably for his wife or at least his girl. I'm guessing his wife, since the gift turns out to be something truly special, costing him "a year's pay".

I think this is just a wonderful tape, and hope you do, too.

Download: An Audio Letter from a Marine in Vietnam to Ruthie Schaffer and Her Family

Coming back over to the domestic scene, here's a tape I found capturing an episode of "CBS Reports", from early 1962. It was fairly easy to nail down this episode and its date, but aside from its existence (verified on IMDB), there doesn't seem to be any other record of this program.

It was absolutely wonderful to hear the long-missed voice of Harry Reasoner, who, in this case, was examining the expanding waistlines (and other measurements) of the American populace, in a program titled oh-so-discreetly, "The Fat American".

At the beginning of last month, after some prodding from a commenter, I initiated a new series, "Acetate of the Month" to capture the home recording format which was most common before reel tape became available to the masses. And that, of course, was the home record making device. Today, the second installment.

And I will clarify that "the masses" did not have access to home disc-cutting machines any more than the average 1950's home had a reel tape machine. The disc machines were largely for the well to do, or at least the upper middle class.

And so it was that one thing a person, group or family might do, is go to a public place and have the opportunity to make a record and hear their voices on it when they got home. This particular item is a six inch, 78 RPM record made at "The Chicago Fair", whatever that was, on July 9th, 1950, by The Rappaport Family. 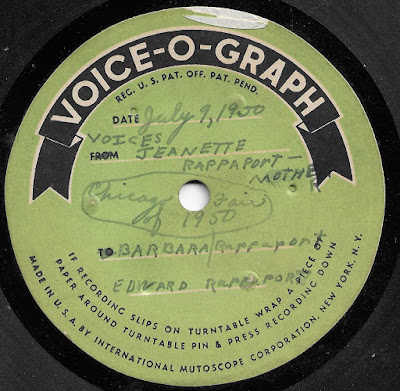 These records did not allow for a lot of recording - this record is barely a minute long. But it certainly captures the excitement of being able to record their own voices, even as they spend much of their 66 seconds complaining about how most things at the fair were not free this year.

(As a side note, this sort of side business still existed until at least 1968, because my family and I made one, in a downtown Chicago Woolworth's - I believe the resulting recording was a 45 RPM, but may have been a 78. I vividly remember this. We listened to it after it was made - my grandmother was in town for one of her rare visits - and in this case, her last one, before her death in 1972. At one point, she adopted a baby voice and said "I'm only three and a half years old". Sadly, we managed to damage the disc that day, before we even got it home.)

~~
Finally, from my stack of "Very Short Reels", I grabbed one housed in a plain, solid black box with no markings on it whatsoever. It turned out to contain three ads for Firestone Tires. Unlike lots of tapes of this sort, these three ads are not variations on one particular sales pitch, but rather, they feature three completely different focuses. The ad mentioning the Indianapolis 500 would seem to place these ads in the early 1960's, but the reference to the number of years they'd been in use at that race, according to Wikipedia at least, would seem to date them closer to 1967 or 1968.