Queen Elizabeth in Chicago, A Labor Day Address, A Demo Reel, Gynecology and "The Dong With the Luminous Nose"

First, I wanted to thank the several people who wrote, either via the comment box or via e-mail, to share their thoughts on last months "BLOWOUT" post. I appreciate the kind words, the thoughts on that format, and the general reactions and impressions of my site. They are all deeply appreciated. It was a small sample, but the general feeling seems to have been that such a post, in which I share a huge volume of material, about which I have relatively little to say, and therefore with minimal text, is a welcome offering. I may do such a post as often as once every other post, at least until I've used up a significant portion of the 400 or so items I have waiting for sharing. For my other posts, I think I will try to cut down on the amount of typing I do, unless there is really something specific I want to pass along.

And now, on with the countdown:

When I heard the news about Queen Elizabeth, one of my first thoughts was "I should share that tape of the time she visited Chicago". I've owned this five inch reel for decades, digitized it over two years ago, and if I could find it, I would scan the tape box for you.

Elizabeth visited Chicago for a 16 or so hour visit, after visiting multiple sites in Canada. She arrived, as you'll hear, on a boat in Lake Michigan, and crossed Lake Shore Drive into Grant Park. For decades, that crosswalk was known as "Queen's Crossing", until the city removed the crosswalk and the stop light, a few years ago. I'll let the tape tell the rest of the story.

As long as I'm sharing that tape, I thought I'd let you hear what was on the rest of that reel. Here's a short segment of WGN radio show called "Midnight Ticker", from the same day as the Queen's visit.

And, as often happens, the remainder of the tape actually contains something which was recorded earlier, and then partially erased by the later material. Here is the tail end of the final episode of "The Gisele MacKenzie Show, a television show which ended its run on March 28th, 1958

We also just celebrated Labor Day, and in honor of that, here is a broadcast Labor Day speech by the Vice President of the AFL-CIO, just a short 58 years ago.

~~~
For those of you who, like me, can't get enough of all things Top 40 Radio, I have just the thing for you. Here is a demo reel produced by (or on behalf of) Lee Sherwood, a journeyman DJ, Radio personality and radio executive. This sampling was put together in April of 1971, and is "scoped" - that is, the songs are cut out of the equation. Just listening to this, you can tell that he was that "journeyman", as I described him - still early in his career, this tape represents stops at several different stations.
Download: Lee Sherwood's Demo Reel, 4-17-71
Play: 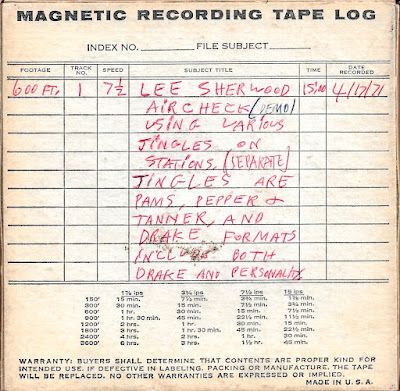 ~~
Here's a performance of an old bit of nonsense verse with guitar. When I first spooled out this next tape, as soon as the person began reciting the poem, I thought, "I KNOW THOSE WORDS". When I was a kid, one of my favorite books was "The Complete Nonsense of Edward Lear", a fantastic collection of prose, poetry and drawing which I still adore to this day. And for whatever reason, the performer here decided to do a little rendition of "The Dong With a Luminous Nose". The words aren't quite in the order here that they are in my book, but it's certainly the same Edward Lear poem.
Download: Unknown - Edward Lear's 'The Dong With a Luminous Nose', with Guitar
Play:
~~
And now for something aggressively esoteric. Somewhere along the way I obtained a batch of reels which contain medical lectures and symposiums, under the umbrella title "Audio Digest". These would be sent on a monthly basis to doctors in various specialties, addressing issues within those specialties, from various aspects. The example I have today - this was the tape on the top of the pile, and one of only two of these that I've listened to so far - is on Obstetrics and Gynecology. It is a mind-numbing 57 minutes long, but I am really trying to give a sample of everything in my collection so..... ENJOY!!!
Download: Audio Digest - Obstetrics and Gynecology, Volume 15, Number 13
Play: 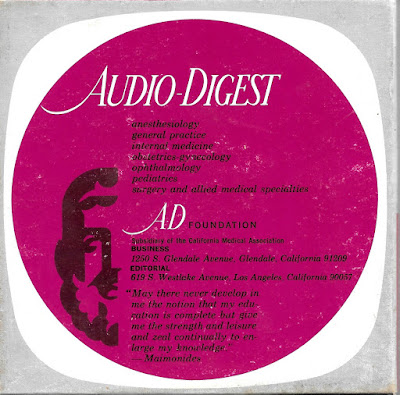 ~~
And finally, here is our "Very Short Reel" for the day. It is, simply, an ad for a local bank. Here 'tis:
Download: Pepper-Tanner - Community Bank and Trust Company Ad
Play: 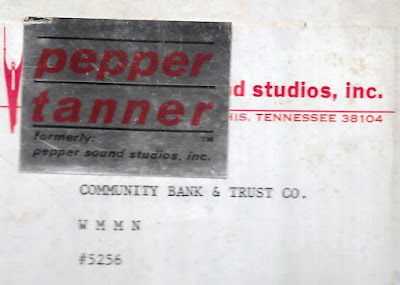