Welcome to the final hours of September!

One month ago, I wrote a post explaining that I have an overabundance of material, some of which I don't have a lot of things to say/write about, and a periodic dearth of time to put together the sort of post I normally would like to. I proposed that at least sometimes, I would burn off ten or more items at once, with a minimum of text. The responses were fairly varied, but no one was really opposed to what I did in that post, and a few were quite enthusiastic.

While I don't actually plan to make this a monthly thing, I am doing another of these blowout posts today, for the second month in a row.

Let's start the ball rolling with my favorite of this post's offerings, a batch of commercials for Owens Community College, in Ohio:

Next up, a sample of something I come across remarkably frequently - a tape that simply captures people sitting around chatting. Sometimes, it's clear that the recording was made for posterity, maybe a particularly interesting conversation, or a visit from old friends, and every voice (or nearly every one) is close to the microphone and it's clear they all wanted to be recorded. Other times, it sounds almost as if the machine was left on by accident, or that perhaps no one by the recordist knows the machine was on. Here is an example of the latter of those two types - a few minutes with some people sitting around talking:

And now, let's talk Milagros. I had never heard of Milagros before I came across this short audio documentary. You can read about them here. Or you can just listen to Marsha Bol and her compatriots:
Download: Marsha Bol and Others - Life Sized Milagros
Play:
~~
The last time (well, the first time) I did one of these mega-posts, I wrote the following, about an audio diary:
I have in my collection several tapes recorded by an American couple living, I believe, in Germany, who made several trips to other parts of Europe during the late 1960's and early 1970's, and made recordings each night, while on those trips, summarizing their experiences from that day.In most cases, they used more than one reel - always three inch reels, with the thinnest, lengthiest tape available, and recorded at 1 7/8 IPS.
Here is another of these tapes, capturing elements of a tour of Norway and Sweden in the summer of 1968. This is the second tape this couple made on their tour of Scandinavia, and once I find and digitize part one, I can share that, too, if there is interest. Unlike the other tape I shared of them, last time, for this vacation, the couple's children accompanied them, and are heard on the tape:
Download: Audio Diary - Tour of Norway and Sweden, 6-22-68
Play:
Here's that three inch tape box! 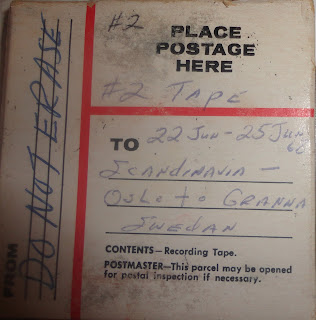 ~~
And now it's time for the "homely music hour". I have tons of reels like this one, featuring people who love to play and sing, even if they are not truly good at it. In this case, it's someone named Alma playing the piano, in a style I find wonderfully nostalgic, and in certain ways not unlike some of the music I play, while another someone named Gus sings in a style which might have been fashionable in the early days of acoustic recording, circa 1895-1910. It seems to me that the days when anyone would create something sounding like this are long since past.
Download: Alma and Gus - Alma Playing Piano and Gus Singing
Play:
~~
Oh, and now here's something. You know that old saying about how someone or something can be "more boring than listening to a file cabinet salesman"? Wait, I guess that's not an old saying. But it should be. Exhibit A follows:
Download: File Cabinet Salesman
Play:
(By the way, in the above segment, just past the 41 minute mark, there is two minutes of a song, followed by a short "Thank You and Farewell - I'm Moving to Houston" speech by a different person than the salesman who had been speaking earlier. That segment gets softer and softer as it continues on through the end of the tape.)
~~
And yet another genre of tape which recurs over and over again is the amateur musical performance (or rehearsal). In this case, rather oddly, the recording of a small combo, led by Bari Sax player (accompanied only by guitar and drums), is interrupted just past the halfway point by a recording (off of the radio) of a Dave "Baby" Cortez track, before it returns to the combo. They're not very good, but they seem to be enjoying themselves.
Download: A Baritone Sax Led Combo Recital (and a bit of Dave 'Baby' Cortez)
Play:
~~
This next tape may not be to scintillating - unless it is being compared to listening to a file cabinet salesman - but it does have a soft spot in my heart, as it was one of the first tapes I ever bought, when I got serious about looking for this sort of ephemera. I was sort of fascinated by it, too, as it was recorded at 15 inches-per-second, a speed I wouldn't necessarily think one would choose to use to record a sign-making lecture, given how quickly one uses up the available tape at that speed. Yes, I know how geeky this paragraph makes me sound. But no doubt you already knew that, if you've spent any time here.
Download: A Sign-Making Class Lecture, 2-17-61
Play:
~~
The oldest recording in this week's offerings is this short series of excerpts from a Major Bowes Amateur Hour. Since Major Bowes died in 1946, this is definitely older than the other items here.
Incidentally, I once played Major Bowes' successor, Ted Mack, in an 8th Grade review near the end of my elementary school career. I introduced "The Andrews Sisters" portrayed by the three smallest boys in our class, all of whom were in drag, and they lip synched to an Andrews Sisters' record. (I played trombone in the band for the rest of the show.)
Download: Segments of a Major Bowes Amateur Hour Episode
Play:
~~
Okay....
Last time around, I left the longest offering - a church related segment - as the final one of my Blowout post features. This time, I'm doing it again, with a reel that was recorded, somewhere, in the early 1950's. It's a faith healing session, complete with the faith healer giving a sermon, some music, some more sermonizing and then performing his miracles. If you're up for this sort of thing, it's a pretty amazing recording. If not, well, we still have our monthly and bi-monthly features yet to come, below:
Download: A Faith Healer Talks and Faith Heals
Play:
~~
And now it's time for our "Acetate of the Month". This is a sweet audio letter from two family members to two other family members. One side is addressed to Bea, and the other side to Momma. It's from November of 1940. I have combined both sides into one single track. The "Momma" side is poorly recorded, or at least has not weathered as well as its flip side, over the years. It is rather difficult listening.
Download: Bob and Ginny - Audio Letters to Bea and to Momma, 11-15-40
Play:
Here's what that record looks like: 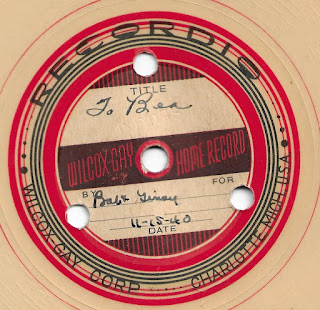 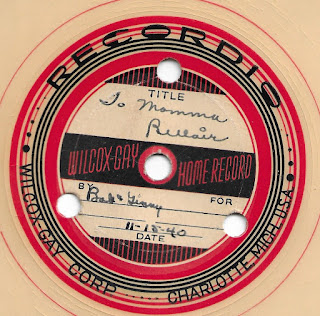 ~~
And finally, the "Very Short Reel" for this posting. I find it rather remarkable that I have this specific little advertisement for the Sunday Chicago Tribune. And that's because the issue being advertised contained a profile of a then-completely-unknown woman in an obscure city job, a woman named Jane Byrne. Byrne, of course, would be, by the end of that same decade, Chicago's first woman mayor. The main story advertised here suggests what might be collectable in 2015, without much accuracy.
Download: Sunday Chicago Tribune Ad, Circa Early 1970's
Play:
Posted by Bob Purse at 6:50 PM