The Return of Joe Gerossi, Belated Mother's Day Thoughts, A Garage Band, An Audition, Some Promos, and the End of a Family Visit

Greetings, fans of measuring the speed at which recording tape passes by the erase, record and playback heads of a reel to reel machine.

That's probably not actually why you're here...

First, I would like to share that, as of last Monday, I will again be gainfully employed. Thanks to everyone who chimed in with encouragement and/or condolences regarding the loss of my previous job. As I wrote today on my other blog, the immediate effect here is that I have considerably less time, as I am ramping up in the new job, to blather on at length about things I'm sharing. Some of you may not see this as a problem...

What is also means here, at least for this posting, is that I have not had the time to scan new stuff, or to go back and listen in detail to anything I saved some time ago. So I'm sharing a half-dozen things today which I listened to some weeks, or maybe even months or years ago, without the benefit of re-listening. I can remember all of them, to one degree or another, but will not be nearly as detailed as usual. They are not mysteries to me, but their contents are not fresh on my mind, either.

With that out of the way, let's get the recorded material you've been waiting for!

Back in 2020, on two occasions, I shared the entertaining ramblings of someone named Joe Gerossi. Those posts can be found here and here. At the time of the second of those postings, I mentioned that there was a third tape of Mr. Gerossi, which I intended to digitize soon. I did do so, but then failed to share it for well over a year. Here is that tape, lasting nearly an hour. Again, I have not rescanned this tape since digitizing it, so you are free to discover its charms, and any sections which are less than charming, on your own.

Since Mother's Day is so close in the rear view mirror, here is a tape I've been sitting on for at least five years, waiting to remember to share it for Mother's Day. I hope this is close enough for there to be some enjoyment. It's a recording of a Primary School's Mother's Day program, recorded at some point in the 1950's. As I recall, the sound quality is extremely poor at points during this recording, but the overall sweetness of it prevails and made it worth sharing.

Here's a tape I've simply labeled "A Garage Band Rehearses". I did just scan this one a bit to remind myself of the era, and found it contained multiple Chuck Berry numbers, "Gloria", "Wooly Bully" and the like, so I'm going to say circa 1965-66.

Here is the only item I'm sharing this week for which I have a relevant image. This is the sticker placed right on the reel: 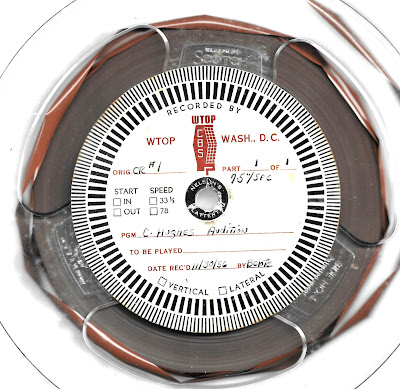 As you can see, this is the announcer audition reel for someone named C. Hughes, made on November 30, 1956, just a short 65 1/2 years ago. Mr. Hughes certainly was an announcer of his era. Have a listen!

And speaking of radio advertising, here are eight commercials put out by The National Religious Broadcasters, in all of five and a half minutes, from 1971:

Here's the final offering for today. I guess I could have made either of these last two items the "Very Short Reel" for the week, but as this one is the shortest, at under four and a half minutes. I've called this, "Comments at the End of a Family Visit", and it's from July 15, 1953. In it, we hear a short organ solo, then a series of family members - adults and children, at least some of them having the family name "Van Sickle" - talk about what a wonderful time they've been having. I hope they came back again.