Vintage Folk Music Radio, More From Japan, Satchmo, Another Acetate, and The Man From Labatt

Before I get started with today's items, I wanted to share that I have again been invited to be part of a podcast. It's the same show - Ephemeral - which has featured elements of my collection four times in the past, and has had me on, as an interviewee, three of those times.

This time around, I am sharing the world of the Star Ads. Those of you who have been with me since the WFMU days, or the 2003 365 days project before that, might remember the Star Ads, but in case you don't know what I'm talking about, I have shared excerpts from them here and here.

The new podcast, which features several more , previously unshared Star Ads, can be heard at:

I also wanted to give an update on my last post, information which will be of great interest to those in the Chicago area, at least those over the age of 50. A new reader, Ed (and welcome and thanks, Ed), wrote in to confirm that "Coughlin's Corner" was indeed hosted by the future Chicago weatherman John Coughlin, but more interestingly, his sidekick on the show was none other than Ray Rayner, who would later become a star of children's television in Chicago for well over 20 years. I love Ray Rayner, and I'm glad to have that information. Thanks again, Ed!

And also, someone who calls himself "Old Guy" wrote in to say that the person in charge of the Charlie Louvin Fan Club (also from the last post), who received an audio letter from Germany, was located in New Oxford,  Pennsylvania, rather than New Rockford. Thanks to you, as well!

Now if I could only make out the senders name, which is garbled by a bit of damaged tape, in the opening moments of that recording.

And thanks to both of you - and everyone else who has written - for the kind words about my work on this blog.

Another cornucopia for you today, starting with a tape I first got to hear almost exactly 27 years ago, in the spring of 1995. And it was one of about a dozen tapes I had bought somewhere (can't recall) which I was very excited to play. And that's because they all contained vintage recordings of one of my favorite radio shows: The Midnight Special. Allow me to geek out about The Midnight Special for a half dozen paragraphs.

The Midnight Special is legendary in Chicago. It began airing on the classical station WFMT around 1953, created by and initially hosted by none other than Mike Nichols. Hosting duties quickly turned over to two of the stations bigwigs, Norm Pellegrini and Ray Nordstrand, and remained in their hands - along with a third host, starting in the 1980's - for roughly 40 years. Their slogan was to play" folk music and farce, show tunes and satire, madness and escape". I've called it "Folk Music Radio" in the name of the post, and that was always the biggest part of the show, but as you'll hear, there were many other genres dipped into, as well.

Along the way, the program championed all sorts of musicians who were hardly being heard anywhere else, particularly in the years before the folk explosion at the end of the 1950's. They were also perhaps the first station in the country (or, at least outside of the Boston area) to play Tom Lehrer's music. My parents taped many favorites from the show, starting not long after its inception, and their New Year's Eve marathon shows were played every year, from long before I was born and well into the 1970's.

The show took a dive, in my opinion, when people started to decide that if you played an acoustic instrument, you were automatically folk singer, even if you were singing navel-gazing songs. And so, somehow, "singer songwriter" and "folk music" got intertwined in a way I simply couldn't stomach, especially as I find them to be pretty much the antithesis of each other - the self-absorbed vs the global. To pick one example at random, James Taylor singing "Fire and Rain" - as much as one might like it - is not folk singing, and the fact that it's sung to an acoustic guitar does not make it so. I could go on, but I won't. I faded away from the show when the then-new host became the dominent and eventually only host, over 30 years ago. The show no longer resembled what it once was. Okay, end of rant.

Anyway, these tapes were all from circa 1960, or a year or so on either side, and that was overwhelmingly exciting for me. My favorite of all of the episodes was this one, which dates from early October of 1960's, probably the first week of that month, based on the new releases mentioned and one comment from the host, who in this case is Norm Pellegrini (who I preferred to Ray Nordstrand, by the way).

This is a recording of the entire two hour show, except for a verse or so of a Richard Dyer-Bennett song at the point that the tape needed to be turned over (and any time one can miss part - or all - of a Richard Dyer-Bennett performance is a happy moment for me). The commercials are included (except for a short period of time many years ago, WFMT has never allowed pre-recorded commercials - they are all spoken by the show hosts). There are segments here that I could do without, as there have been on every broadcast of the Special that I've ever heard, but the high points here are very, very high, and the low points are brief.

The episode starts (after the introductory comments) with a track from the then-brand new Jimmie Driftwood album "Tall Tales in Song", the song is "Fi-Di Diddle Um-a Dazey", and upon hearing this tape, that immediately became an all time favorite of mine, which it is to this day. I sought out a used copy of that album starting virtually the next day, and not long after, Bear Family released ALL of Driftwood's RCA albums in a box set, which I gobbled up as soon as it was available.

As mentioned, I have several more of these, as well as other Midnight Special tapes from the 1960's and '70's which I've picked up along the way, and if there is interest, I can digitize some of those.

Now, here's a little piece of tape featuring an interview with Mark David, who was a representative of Labatt Beer. The interviewer is one Bob Brokaw. I can't put my hands on this tape at the moment, to share an image (I digitized this about two years ago), but it was dated 7/22/64. The beer now claims to be the # 1 selling Canadian beer worldwide, but at the time of this interview (and this is the point of the interview), the beer was being introduced in the US. And we even get a weather forecast, another Firestone Tire ad (after those I shared last time), and a fantastic, if very brief, ad for Capri Luncheon Meats! This program aired on KGO, San Francisco.

Moving on, here's another interview, or at least a fragment of an interview. This might be a commonly available recording, I don't know, but in case it isn't, I thought I'd share it here. It's six minutes of an interview with Louis Armstrong, in which he is very briefly being asked questions about his career, in chronological order. Not included here (as it came after the playing of several Armstrong live tracks), is the announcer explaining that the interview is from Vancouver, in 1954. I believe this is wrong, as the album he is promoting seems to have come out in 1958, but I've kept the date as 1954 here, since that's what's identified. The key point here, I think is that "Hillbillies Make Love, Too".

And now, it's time for yet another in the series of tapes sent home, from our young man in Japan, who I will continue to identify as a "student/soldier", although that may not be accurate. This one dates from prior to his introduction of music to his tapes.

Please see the previous entries for more explanation here - or rather, an explanation of my confusion about exactly why teen was in Japan in the late 1960's. Maybe there are some clues here that I've missed. This tape is date May 15, 1968.

And here's what everyone has been waiting for! It's our Acetate of the Month. Today's acetate has all sorts of writing on it, identifying the singers and songs, with the pianist and the person recording the record listed in this side of the record, as well. Look!: 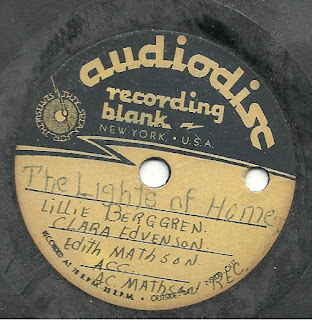 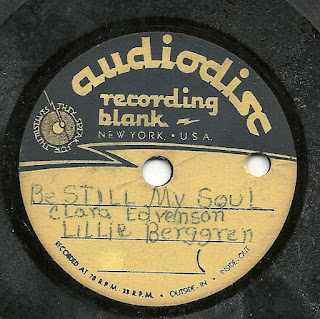 ~~
And here's the other thing you've all been waiting for! It's this week's episode of "Very Short Reels". The following 148 seconds - about the length of the average 1960's pop hit - is all that was captured on one side of a three inch reel of tape that found its way to my collection.
And at some point, this must have been someone's prized possession, as (after about 40 seconds of difficulty with making the recording) it captures what is described as "Debbie's First Cry at Four Days Old", with the date given as September 28th, 1952. Debbie is coming up on 70 years old this fall. This is followed by another recording, perhaps Debbie a few months later, but whether it's her or someone else, it's certainly a baby laughing.
Download: Debbie's First Cry, Four Days Old, 9/28/52, Plus a Bit of Baby Laughter
Play:
As the tape box (below) indicates, the flip side had recordings of part of Eisenhower's acceptance speech and Stevenson's concession speech, following the 1952 Presidential Election. Those seem likely to be available elsewhere, so I didn't include them here. 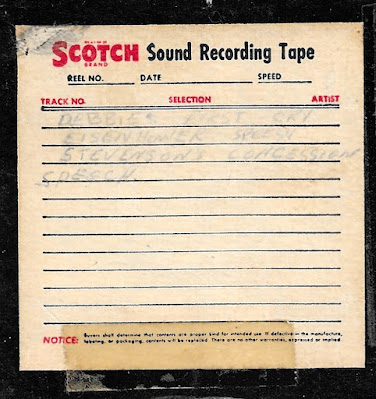