All That Baseball, Audio Letters, Some Dubbing, Superman, A Short Concert and Some Ads!

I want to start with a bunch of housekeeping and thanks.

First, thanks to everyone who continues to read and listen to my posts, and especially those who comment. I understand the purpose of the anonymous comment feature, but I sure wish I had a way of knowing how to respond individually to many of these comments which come through anonymously, or with a name, but no e-mail address. Please know I read and appreciate all of them.

To a person named Kyle, who wrote that he is reposting some of this material to YouTube: I appreciate you doing that, and I found a couple of those postings. I would love it if you would include, in your re-postings, a link back to my site. That would give a little bit of publicity to the site, and to the additional material people can find here. Just a request.

I also want to direct folks to the comments of my last post. "Old Guy", who has commented several times, and an anonymous poster (who might also have been "Old Guy") did some digging into the wonderful "Christmas 1978" tape that I shared. Between the two of them (or the one of him) they/he found out exactly who this family was, and provided more information on daughter Ginger, who was Miss South Dakota of 1977. Have a look.

Next, I am very much overdue in directing folks to the YouTube page run by a frequent commenter to this site who goes by the name Timmy. His page is chock full of great - and often quite lengthy - radio broadcasts of the sort that people really like, based on what gets responses here. These date from the 1960's all the way into the 2000's. I listened last month, for example, to a great overnight appearance/interview by Flo and Eddie, a nearly three hour show from January 1st of 1977 on KLOS. His posts can be found here. Timmy has been a great pal and a true friend of my blogs.

I also was lucky enough to encounter a gentleman named Charles who has a fascination with (and an enormous collection of) acetates, and who has been buying some of those from me (which I've mentioned a couple of times that I've been selling). He was delighted to find out who he was buying from, having been a reader of my posts at WFMU for years, and I was equally delighted to let him know I was still in business, here. He was kind enough to send along some fascinating looking reels that he had sitting around, which had belonged to a staff person at WABC-TV in New York. I have not delved into them yet, but if they contain what the boxes say they do, you will probably hear the contents of some of them, eventually, right here.

Finally,  I want to make mention of a new correspondent - whose name I'm not sure I've yet been told - who is something of a kindred spirit to me, and who also has what sounds to be a massive collection of a great variety of sounds, some of which he has already started sharing with me (including an American's audio letter back home from Australia) and which, once I listen to it, I may request that he allow me to share some of it here. I am very much looking forward to whatever else our conversations may reveal.

Oh, and one last thing - that final gentleman who I just wrote about, passed along some information I think is very helpful and worthwhile. He wanted to make sure I shared that libraries will transfer old media to digital formats for free, or, as they do in my local library, teach you how to do it and then let you do it for free. I'm sure there are some which will do this with reel tape, but most will do it with 8mm film and video tape.

Thanks to everyone above, and anyone who I've forgotten to shout-out to.

And now, back to the countdown:

Okay, I'm gonna start with the subject of much comment, e-mail conversations and requests and offer up the full baseball game recordings which I alluded to in an October post. At this point, I have no idea if these are the recordings which are already traded in baseball collector circles or if they are recordings of a different station than those traded tapes. I do know that the game I thought was from 5/31/61, and is labeled as such on the tape box, is actually from 5/30/61, and that means that both of these games DO circulate in those trading circles. But on the off chance that these are versions of those broadcasts unknown to the great number of baseball collectors out there, here they are.

One note before anyone gets to the end of 5/30/61 and is frustrated - the tape runs out just before the last out of the game. The game probably continued for fewer than a half-dozen pitches (perhaps only one) after the recording here ends, but... the entire game is not here.

Here's the relevant detail from the tape box: 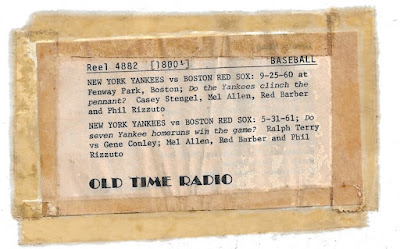 And here are the two games:

Okay, on to things I haven't been asked to share. I have several tapes- all from the same collection - which feature people doing dubbing work for films or television shows. At some point - which I can't seem to find right now - I shared at least one of these tapes, and someone told me what was going on, which is that dialogue is being re-recorded to be looped into the existing film or video soundtrack. . The tapes never have anything written on them which identifies the work being "corrected", and by their nature are quite choppy and nearly random. Have a look at the box, which seems to actually say "Pubbing", rather than "Dubbing": 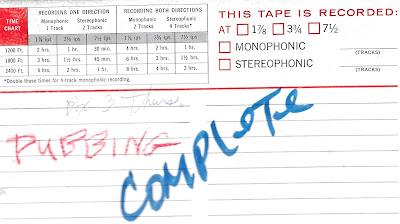 This one is more interesting than most, to me, because of the interruptions at a few points by sounds in the studio and in the street outside.

If anyone is interested in hearing more of these, I have at least a half dozen more.

Now, here's a tape I've been sitting on for nearly three years. But I never shared it, for whatever reason. It is a compilation of audio letters from a medical resident - his name is in the track properties - to his family. The early tapes captured here have fairly poor sound quality, but it get considerably better after about 30 minutes or so. At the end of the tape is a bit of odd music which was contained on the other channel of the tape at one point.

It's been a long, long time since I listened to these all the way through, so I don't actually remember any details at all, but I remember that this tape was quite captivating. I hope you will find it the same.

Download: Compilation of Tapes from a Medical Resident to His Family

Okay, so here's a tape called "A Concert By a Male A Capella Group". And that's the pretty much everything I know about it, although I will say that a bit past the 30 minute point, they sing a wordless song which will familiar to many people who found themselves enjoying a certain viral YouTube video several years ago. At the end, they sing two songs I just adore, "Hawai'ian War Chant" and "Dry Bones"

Download: A Concert By a Male A Capella Group

Okay, I truly don't understand what's happening here, and this is another one I've been sitting on for years, with no real reason for the delay. I'll just call it a Superman parody, apparently in front of an audience, and invite any of you who'd like to offer up any insight into it, to do so, please.

And finally, our "Very Short Reel". And I suspect this will the favorite offering of the post for some of you, as it is a short reel sampling the commercial work of a company called "Com-Track, Inc." Dating from the spring of 1968, it contains some melodies and slogans which will be very familiar to those of us who were around in those days, for some of the most iconic American brands imaginable. 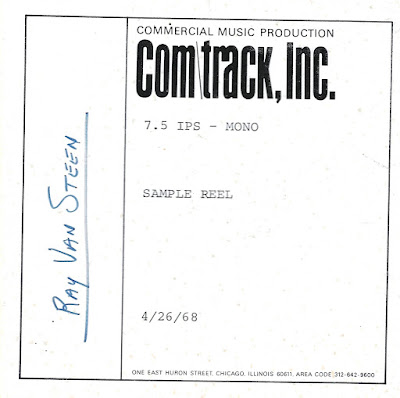