"The Sportsman's Friend", The Hits of 1954, A Bit of Art Linkletter, More Shortwave, "Sing Baby Sing", and More!

I have another motley batch of seven slabs of vintage reel to reel recordings for you. I'm delayed this time around by a minor eye injury which made looking at a computer screen (which I have to do for work all day) increasingly uncomfortable, meaning I did little online outside of work for about a week. It seems to be all better now.

But enough about me. Let's hear even more about Lucky Lager. Somewhere along the road of life I managed to take possession of a whole batch of Lucky Lager related reels, and if this group of sixteen ads on the them of "Sportsman's Friend" is not the best of the lot, it's close. 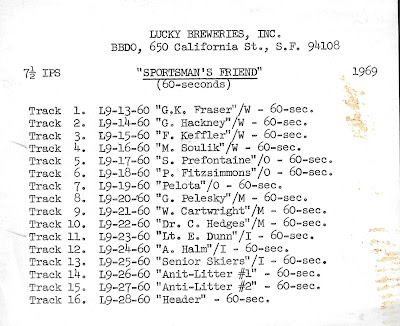 Next up, yet another in my now-diminishing batch of previously unshared Shortwave recordings, this one - as most of them have been - is a recording of Australian programming directed at the American market.

And now here's a tape which, under most circumstances, would have been my showcase share, right at the top of the post. It's a broadcast of some station's rendering of the top hits of the week, done in very much the style of "Your Hit Parade" in which the songs are played at random, with the ranking number given, rather than being a strict countdown.

Two things resulted in my burying this down a few spots in this post. First, it's programming from about June of 1954, which was certainly one of the less scintillating moments for pop music in North America. But even more so, the sound quality is wretched. I mean, the shortwave recording above, is also in terrible quality, but that's expected in such a recording. This seems to have been recorded during a thunderstorm or something, and the station doesn't seem that well tuned in, either. If it wasn't for the nature of the tape - a genre I just love (the hits of the week) - I might have passed on sharing it at all. Hope you find it worth listening to, despite the quality.

Here's the relevant bit of the tape box, even if the sticker on it is inaccurate - everything here is from 1954:

Switching gears pretty aggressively now - and that's a good way to put it, as I'm sure this man switched a few gears in his time - here's a brief excerpt from an episode of "Art Linkletter's House Party", a wildly popular television show which ran for almost two decades. In this segment, he interviews "The Fastest Man in the World", Lt Col John Stapp. The segment does a good job of explaining that title, and if you want to read more about Stapp, you can do so here.

Are you, by chance in the mood for a bit of supper club style music? Well, if so, I have just what you've been waiting for - about 18 minutes of a guy named Jack Wells, performing in front of what seems to be about eight people at most - dropping the name of blind balladeer Al Hibbler at one point - with a handful of songs.

Here's one sort of thing that I just love, and that I sometimes hear from others that they enjoy, as well, It's the family home recording, in this case, a bit of a hodgepodge. Adults are heard discussing the recording process itself, and having other innocuous conversations. Children sing songs and are interviewed by the parents. In between the segments are moments of older recordings. An article about a speech by Vice President Nixon is read. A statement about being unable to stop smoking follows, although it veers off into other subjects, after a while. Finally, a brief audio letter finishes the tape - although it seems odd that such a letter would be on a tape filled with family material, and that it would not be recorded on the length of tape actually needed for what the guy wanted to say (it runs out, mid-thought).

And finally, our "Very Short Reel" today comes from the Mountain Home Schools of Arkansas, where, at some point, there was a production of a show called "Sing Baby Sing", and here we have three promos for that show.