I have something today which I find utterly fascinating, and that I hope you will, too.

But first, some housekeeping updates:

My friend and frequent commenter Timmy has posted a nearly hour long blast of KRTH, and their tribute to Bobby Darin (who, coincidentally, figures strongly in my first feature, below), from December 20, 1973. It's on YouTube, and you can find it here.

Two posts ago, I offered up a significant amount of Jack Paar material. Eric Paddon, a TV culture hawk who can almost always be counted on to pinpoint what it is I've shared, and some of the details, has identified these segments as having been from 8/4/59 and 9/3/59. Additionally, he's shared links to available video of the Debbie Reynolds segment here, and in better shape, here.

And two weeks, ago, in my VERY SHORT REELS FESTIVAL, I finished with a bizarre tape built around "The Stars and Stripes Forever". A poster named Snoopy offered up that

The "Weird Stars and Stripes" has a brief sample of "The Wild Bull" by Morton Subotnick, Side A, about 8:15-8:25. I'd like to hear more of what that person was trying to do (the tape sampler, not Subotnick).

Finally, with regard to that same posting, I made a comment about how sometimes three inch reels, particularly those that seem likely to have been recorded on those tiny dictation reel machines, tend to have anywhere from minor to severe speed variances. I did not know why. A poster named Scott explained it:

A lot of those little 3 inch decks (like the ones on Mission Impossible) didn't have capstans and pinch rollers so the tape speed was subject to the small, unregulated take up motor.

Thanks to all four of you, and to everyone who writes in. I really appreciate it.

And now, the most interesting thing I've found on a reel in a good long time: 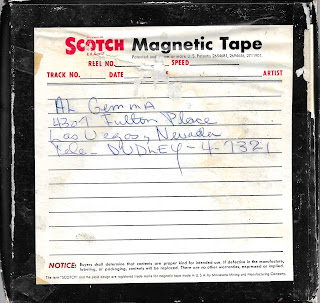 This box, seen above, had been sitting, waiting for me to discover it, for a good long time, in my basement archives. That the reel encased in it only had about three minutes of tape on it didn't encourage me to investigate sooner. But I'm glad I had a listen, just a few days ago.
The story begins with two young songwriters from Las Vegas, Al Gemma, Lyricist and Frank Lendini, composer. Al Gemma had the surprising good fortune to get to play a few of their songs for Bobby Darin, during one of his tour stops in 1959, and was further encouraged to send the songs on to Don Kirshner. Or at least, that's what happened, according to the letter that Mr. Gemma send to Don Kirshner, which was in the box with the tape. Here is the letter in its entirety, dated July 19, 1959: 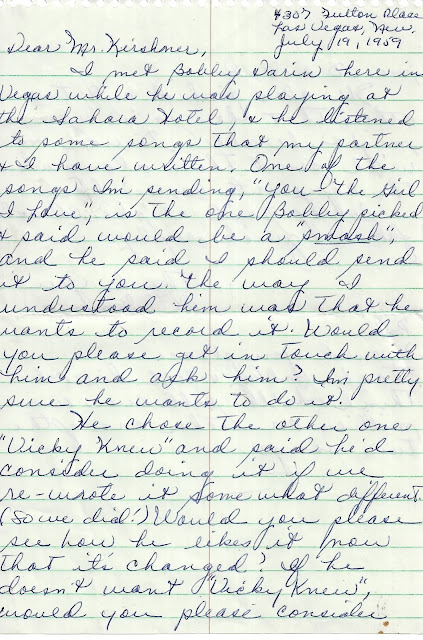 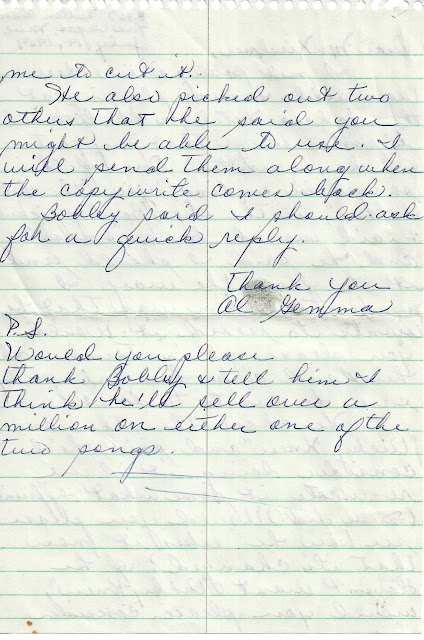 That's quite a tale, especially the encouragement from Darin and the enthusiasm he is reported to have about one of the songs.
So, what do the songs sound like? Well, first they are extremely short. totaling just under two minutes, 50 seconds between the two of them. They are competent, but very derivative - I don't sense what would have stood out to a performer of Darin's caliber and abilities, particularly just before he released his most successful single, "Mack the Knife".
Here's the first one, the one Darin is said to have been hot to record. It has the fairly clunky title, "You-The Girl I Love"
Download: Al Gemma - You-The Girl I Love
Play:
And the second song, which Al Gemma said the songwriters had reworked, at Darin's request. It's called "Vicky Knew"
Download: Al Gemma - Vicky Knew
Play:
Rather oddly, Al Gemma did not use a new piece of tape for this recording. He recorded in half-track mono over some other recordings, leaving on the remaining channel some recordings which had previously been recorded in whole-track. I would imagine that if Don Kirshner bothered to listen to this tape, it would have been on a stereo machine, and he'd have to have turned down the right channel. Here, for completeness sake, is what's on the remaining channel - two segments of piano led instrumentals, neither complete. I don't know the first tune, the second one is "And That Reminds Me".
Download: The Al Gemma Tape - The Other Channel
Play:

Interestingly enough, the story does not end there. Both of this songwriters actually got past the starting gate in the business they were so interested in entering. While both of these songs were copyrighted by their authors by 1959, that's not really a sign of anything - anyone can do that. On the other hand, the two of them later copyrighted a song called "Girls Girls Girls", and that song, along with another one the two of them wrote, made it onto a 45 released on King Records in 1961.

And Frank Lendini? He got even further, releasing a 45 under his own name in 1964, featuring the song "Give to Me", and its flip, with some lyrics that would likely not fly today, "So Young".

That's where the Gemma and Lendini story seems to end, but if there is more, I trust someone out there will bring it to my attention. The only question remaining in my mind - did this tape somehow come to me from a collection which once belonged to Don Kirshner? Without going into detail, I will say that other, less interesting tapes in my collection have led me to believe I did at some point pick up tapes that belonged to his company, so it's a distinct possibility. 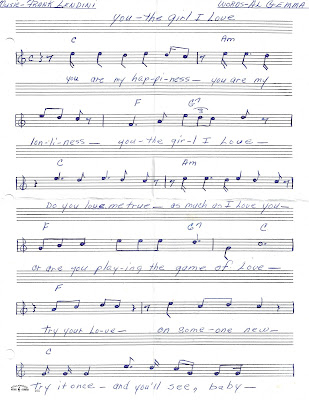 And if that's not the find of the year from my collection, I don't know what is.

Here's another tape I just love, mostly because it comes from the dawn of reel tape recording, and captures people at home.

For here we have a tape that I could have subtitled "Have You Heard 'John and Marsha' Yet"? And that's a title which could only have come from the late winter of 1951, when Stan Freberg's first single was turning heads across the country. There is another clue here which also dates this to the early years of the 1950's, and given that it's a home recording, that's an exceptionally rare thing.

This is also a paper reel - that is, a reel of recording tape with paper backing, which I've written about before. This was phased out by 1953, if not sooner, and tapes with paper backing are almost as rare as home recordings from 1951. Not to get too technical, but the sounds on this tape were also recorded across the middle of the tape, not using the outside edges at all, and this, again, is a feature found on the earliest machines, one that seems to have been phased out even sooner, perhaps by 1950 or 1951.

As you'll hear, the recordings have the sort of White Noise backing that I've come to associate with paper reels. I don't know if that was the fault of the tape itself or of the early recorders. I can't remember hearing it on any of the plastic backed reels from the same period, though.

There is not anything amazing on this tape, except that it exists. These are people doing something 99.9% of the population had not done yet - recording their voices on tape. And I find that wondrous and quite worthy of sharing. The opening half of it is admittedly not very interesting, but I still can't get over the fact that I'm listening to people learning what tape recording is.

The tape, which runs about 14 1/2 minutes, starts quite softly, but gets louder after a few minutes. A man tests the machine and sings a few songs, including "Goodnight Irene" (the other clue to the time frame, "Irene" being the omnipresent hit of the previous fall). After a moment of another man talking, and some silence, we have conversations at home, a moment of a fake phone call and some more testing and silence. A man gives his name as Larry Ferrante and repeatedly gives a radio-styled introduction to music.

At 5:45, things pick up (well, for me, anyway). "Have you ever had your voice recorded"? A short interview ensues, and then a recreation of "John and Marsha", and then some brief renditions of recent hits, by Larry's friend Lenny (who had never heard his voice recorded before). More "John and Marsha" and more songs. In what for me seemed an odd twist, the last three and a half minutes contain a man reading part of the play "A Streetcar Named Desire".

Now, for those of you who like older music, or who like lengthy airchecks, or who just like well made radio programming, I have a 96 minute segment that, if it were described to me, I probably wouldn't choose to use on this site. You see, it's a broadcast from 1980, from a station called WFLM in Crown Point, Indiana, of a program featuring the pop music of the 1940's and early 1950's (along with one from 1958). While there are certainly pop records from that period that I like, and several that I adore, that description doesn't sound like something I'd particularly like to experience for over an hour and a half.

But I have to say, this program is done exceptionally well - certainly the best I've ever heard for a program of such music. There is intelligent commentary about the music and the world of that time, a challenging  call-in question, and an absolutely relevant well done countdown of the top songs on the very first "Billboard Honor Roll of Hits", which happened to have started 35 years old that week (as of 1980), marking this program nicely to March of 1980. I enjoyed this very much, and maybe you will, too.

And now to the "Acetate of the Month". Nothing much to say about this one - just yoyur average, everyday accordion/marimba duo playing "Fascination" and the same two, in a small combo with bass and trumpet, playing "I Got Rhythm", the latter far more effectively recorded than the rather wobbly "Fascination" 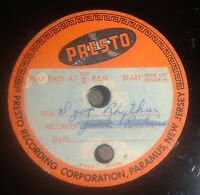 ~~
Finally, if you need something to help you sleep, I have today's "Very Short Reel". Here's a gentleman, recorded most likely in late 1961, who is giving some insight into the state of the then-current stock market, with a specific focus on the value of buying "Suburban Gas".