Hoagy Carmichael, An Impatient Grandma, A 1976 Aircheck, and How to Bisect an Angle

Greetings,
I have another nice cornucopia of sound for y'all today, but first, I wanted to give great thanks, yet again, to Eric Paddon, who has been of great help over the years getting to the bottom of the history behind things I've shared. His recent note to me is so great, and so essential to the site and the post it relates to, that rather than just link to that post, which is here, I'm also going to repeat his comment in its entirety in today's post. It relates to the series of game show recordings that were posted in the middle of my last entry.
Here's what he wrote:
The index of Gil Fates book on the history of "What's My Line?" reveals this particular program was part of the August 21, 1969 taping session for the show's 1969-70 season originally. That said, even if this was recorded in 1971, it would not be a "rerun" per se because syndicated game shows (which WML was starting in the Fall of 1968) in those days were "bicycled" to different stations and thus no two stations would be showing the same episodes at the same time. And if a station signed up to air the program after it had been on for a year, it would have the option of running the previous year's shows first! This practice continued with syndicated game shows up through the end of the 1970s and it explains why some stations would sometimes be airing a syndicated game show more than a year or two after actual production had ceased (or why in the case of "What's My Line?" some stations would be airing episodes featuring Bennett Cerf on the panel more than a year or two after he died). Wally Bruner is the host, and the panelists are Gene Rayburn, Nancy Dussault, Jack Cassidy and Sue Oakland (who did the on-air editorials for WCBS-TV in this era). A rare week when Arlene Francis was off.
The "Beat The Clock" fragment is more rare and potentially from an episode that doesn't exist (in contrast to the WML which is accounted for). The 1969-70 season was the first year of the BTC revival with Jack Narz hosting. That first season it was taped in New York, but starting in its second year, production moved to Montreal to save costs. GSN and BUZZR have never aired any episodes from the first season in New York which suggests they don't exist.
"Words and Music" would be the rarest of the three as NBC did not keep any of their daytime game shows. No videos have ever surfaced and only one other audio recording in the past. https://www.youtube.com/watch?v=wpIRFQTfjDU&t=39s
Many, many thanks, Eric.
~~~
And now, here's a tape that came with a sheet of paper stuff into the box that looks like this: 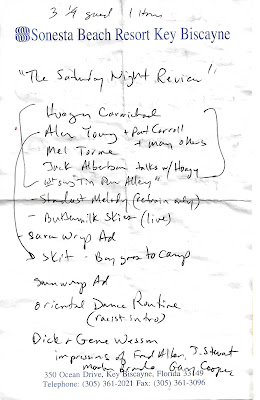 The contents of the tape are as marvelous as that sort of haphazard capturing of it might indicate. Because here we have nearly an entire broadcast of a short lived show titled "The Saturday Night Revue" which ran in 1953 and 1954. Fans of Hoagy Carmichael will particularly love this tape, as he hosts the show and performs several of his best known songs.

These are interspersed with a few very draggy and fairly unfunny comedic sketches and other material. I find it interesting that they chose to do what to modern ears will be a very offensive Asian caricature introduction at one point, yet Carmichael seemingly knew well enough to change the words to one of his songs, a moment later, which contained a far less offensive (in 1953) word, singing that the Hong Kong Blues was about an unfortunate "southern" man.

Incidentally, it's clear that the note above was written decades after this program was recorded - just have a look at the zip code, area codes and fax number at the bottom of the page. The writer also identified the Asian bit as "racist".

The show is not complete - or perhaps this is parts of more than one episode - anyway, the tape ran out during a comedy sketch. And the sound/tape quality is fairly bad at some points. But what's here is a pretty good snapshot of a variety show in the early Eisenhower years.

The flip side of the tape is a different animal entirely. I suspect it's from the same time period, although I really don't know. Our note-taker has offered up a few comments on the flipside of the page (see below), mostly saying that "Grandma is Crazy", and indicating that there is later a phone call in which we mostly only hear our end.

I went back and forth about whether to include this 30 minute recording, and finally decided it was worth preserving for its acute level of real "around the house" feel. Anyone who has dealt with a relative with dementia will find the "Grandma" section familiar and probably a difficult listen, and that's all I'll say. And the phone call is entertaining enough, if you like such things - it would be easy enough with sound software to get a good portion of the other person's conversation, too.

Download: Recordings Around the House, circa 1953: Grandma Wants to Go Upstairs, A Phone Call

And here's the flip side of that piece of paper: 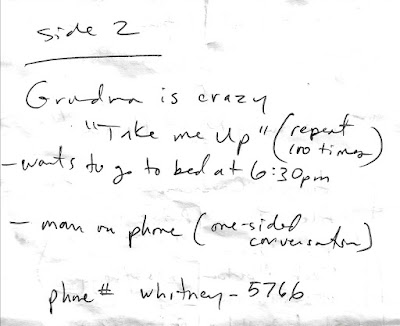 ~~~
Next, I have a "scoped" aircheck. Many - perhaps most - of you might know that when a DJ wants to promote his talent, for a new opportunity or any other reason, he or she will record an airshift or two, and cut out all of the music, aside from the section where he or she is talking.
That's essentially what we have here, with a few odd differences. The DJ's name might be Lan Shepard. I can't tell for sure, and a web search was no help. He was definitely doing overnights on WWCO in Waterbury Connecticut, and combined parts of at least two overnight shifts into this short (12 1/2 minute) tape.
What I find odd is that this scoped aircheck contains the newscast - which Shepard did not do - and some commercials, which doesn't sound like the DJ either.
This also served to remind me - not that I've ever forgotten - how wretched most top 40 hits were in 1976. Blech. Actually, my favorite thing here is the concert ad at around the ten minute mark. Fleetwood Mac opening for Jefferson Starship!! Can you believe it? I'm sure that 1976 was the last time that would have been possible.
Download: Scoped Airchecks - Lan Shepard, Overnight on WWCO, Waterbury Connecticut, June, 1976
Play:
~~~
Switching gears pretty dang aggressively, here's the contents of one of those three inch reels I've mentioned from time to time. Both sides of the tape total just under eight minutes. On side one, a young person explains her (while I'm guessing it's a "her") project, "How to Bisect an Angle". When she's done, we hear the last few seconds of someone playing the ukulele.
On side two, it's "Joke Time", and I find this to be a massively entertaining little four or so minutes with a group of what I'm guessing are middle school aged kids. The presence (at the end) of one of the Beatles' first two US hit songs in the background, and their enthusiastic singing along, date this to at least the late winter of 1964, and I'm guessing that it's from just about that time, and not much later.
Download: How to Bisect an Angle & Joke Time
Play:
~~
And finally, it's time for our "Very Short Reel". And here's a very short reel about a very short lived Baseball team, The Rochester Aces. They only existed under that name for a year - and it was a very good year, too, ending up in a trip to the 1993 Northern League championship, which they lost. You can read about them here.
Download: Rochester Aces Promo - June 1993
Play:
And here's that tape box!: 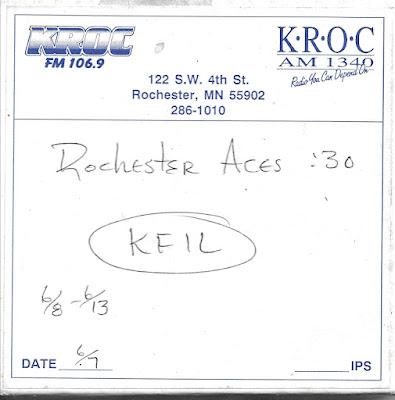