For this last post of the year, I'm going to focus almost entirely on Christmas and New Years, with only an exception for my weekly "very short reel" - and a bizarre one of those, at that.

First, as I've done every year on this blog, I have a recording of a family celebrating Christmas at home. In this case, it is among the earliest, if not the earliest, Christmas recording I have featured, as the box makes it clear that we are hearing "Christmas, 1954", at a house on "River Road, Chatham, New Jersey". See?: 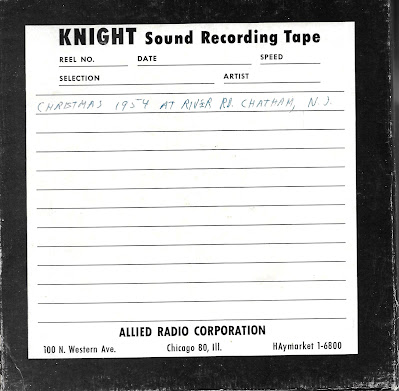 There is some wonderfully charming stuff here, mixed in amidst the general conversations, package opening, and (unfortunately, in this case) moments of poor recording quality. I particularly enjoy the music, although the final segment of singing in marred by someone who decided to add a vocal version of stand-up double bass accompaniment, and did so as loudly as the piano and singer, essentially ruining the entire segment.

Travel back in time almost exactly 67 years, and enjoy a family Christmas celebration.

In a moment, I will have my usual "Acetate of the Month", but first, I have something of a mix between my usual posts and that feature - here is a reel of tape I found, in which someone made a tape of an acetate that he found.

The man who is speaking (Rex, in St. Louis) was almost certainly part of a "tape exchange" club of some sort, probably the type (which I've learned was quite a thing, in the '70's and '80's), in which members exchanged tapes of old time radio. What the speaker has found, as you'll hear, is an acetate someone made on Christmas of 1953, in the Philadelphia area. The person spun the radio dial and picked up nearly 20 minutes of Christmas programming on that day. An enjoyable little diversion from nearly 68 years ago.

And now here's that Acetate of the Month. And in this case, it's a lengthy one, recorded at 33 1/3 RPM on both sides of a ten inch acetate. And this one is from a Christmas party. Specifically, a Christmas party held by the employees of a local post office, in December of 1960: 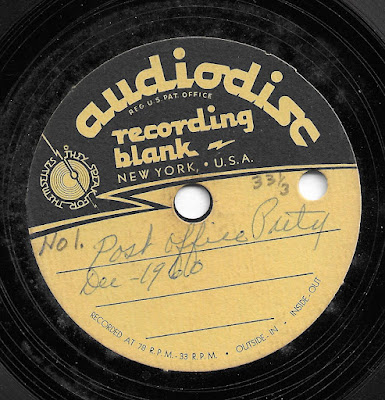 Aside from saying that there are moments here which are quite affecting, I believe I will let this recording, which is about 25 minutes long, total, speak for itself:
Download: Post Office Party, December, 1960, Side One
Play:
Download: Post Office Party, December, 1960, Side Two
Play:
~~
Moving on from Christmas to New Year's Eve, what I have here are a few fragments from a top 40 radio New Year's Eve countdown, as 1964 became 1965. I deeply wish I could share the entire countdown with you, but our intrepid tape operator, whoever he or she was, was one of those people who desperately wanted to avoid getting the DJ's voice, so although the entire top 25 of the year (for this station), the DJ patter (and that of a supremely annoying sidekick named Bruno) is only audible before the # 1 song. The rest of the songs literally cut on after they start, and cut off before they end.
It's an unusual top 25, too, at least when compared to where some of these songs charted nationally that year. # 25 is a version of "Shenandoah" that, as far as my chart books indicate, never hit the charts nationally at all. Other songs which seem to have been MUCH bigger locally than nationally were. The numbers in parenthesis are the songs' national peak - not year end, but just regular run - on the Billboard Hot 100:
# 20 - No Particular Place to Go (10)
# 16 - In the Misty Moonlight (19)
# 13 - Haunted House (11)
# 12 - Chug-a-Lug (9)
and
# 3 - Nadine (Is It You?) (23)
Only two of the above made Billboard's Top 100 of the year ("Haunted House" and "Chug-a-Lug", and neither of those made the top 60.
And I love Chuck Berry, and wish his comeback in 1964 had been big enough that he'd had two of the 20 biggest hits of the year nationally, but that was not close to being the case!
Anyway, the station is KXOK, in St. Louis (which helps explain the Chuck Berry songs placing so high). All I have here is the # 1 song (which should surprise no one), with part of its introduction, then a recap of then-recent presidential election. Then there is some talk about the new year ringing in around the world (and an atomic clock counting the seconds), followed by the final seconds of 1964, counting down to 1965 for St. Louis. This is followed by the first song played in the new year, a bit of DJ patter and the start of the next song - "Shake a Tail Feather" by the Du-Tones - a top 60 hit nationally in 1963, but probably a bigger hit on KXOK, as the group was from.... St. Louis.
Download: 1964 Becomes 1965 on KXOK, St Louis
Play:
~~
And now it's time for that very bizarre, and "very short" reel. What you're about to hear is contained on perhaps 30 or 40 feet of tape - if that - which I found spliced to the end of a large reel of leader tape.
The first half of its 82 seconds is mostly some sort of white noise. There is something going on faintly beneath the noise, but not much. But precisely halfway through, there is a great bit of vocal noise,  followed by a young person speaking in a foreign language. I believe it's French, but I don't speak that language, and with the white noise persisting throughout, so I'm not even sure I'm right about the language. Maybe someone out there can assist in identifying what's being said.
Anyway, this little hunk of tape sure fascinates me.
Download: A Remarkably Odd Piece of Tape
Play:
~~
And finally, those of you who have been reading my posts for the last few years know that my family uses the Christmas Card tradition to engage in a bit of performance art each year. Previous end-of-the-year posts have other examples, and now, here is the latest in the series: 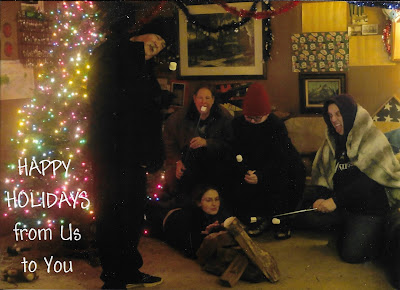 From the left, that's me, my wife with the marshmallow in her face, then our two adult kids, and on the right, the fellow who will soon be, variously, husband, son-in-law and brother-in-law to the rest of the individuals in the photo.
Posted by Bob Purse at 10:05 AM