A 1960's Student/Soldier, A Visceral Radio Play, Two Types of DJing, and More!

Before I go any further - and because I definitely won't be posting again before next Thursday - I want to wish a Happy Thanksgiving to everyone who will be celebrating it.

To start today, the first of a whole batch of tapes that I have from the late 1960's, made by a young man living in Japan. They are audio letters to family (or at least to one family member) in the states. At some point in the last year I acquired more than a half-dozen of his tapes, and I'm still digitizing and listening to them.

And I am more than a bit confused as to his status, and as to why he was in Japan. The content of the first several tapes led me to believe he was a soldier, who was also attending school in Japan, because he both mentions his schooling, at length at times, and also talks about the local army base, where he was living during the times captured on some - but not all - of the tapes. That led to my impression of what he was doing in Japan, when I labeled today's feature as "From and American Student-Soldier".

More recently, in tapes I will feature going forward, it becomes more clear that he was a high school student during the times reflected in most or all of these recordings. So that made me think maybe he was living with a family member who was in the Army, yet those other tapes mention him having moved off-base. I find that aspect of these tapes very confusing.

I intend to share one of these in each post until I run out of them, so maybe someone more familiar with the times, and/or who is better at picking out details which will explain things, can help.

I don't have them in chronological order yet, mostly because some remain undigitized, so I just chose the first one that I listened to, to share with you.

Download: Audio Letter From an American Student-Soldier in Japan, March, 1967

Next up, a fascinating reel that I bought at the old ALS Mammoth Music Mart, which I've written about many, many times. This is a remarkable production of a retelling of "Ali Baba and the Forty Thieves", produced, no doubt for radio, by a conglomeration that called itself "Earwaves Productions". I cannot find anything about this company online, but then again, this does date to 1976.

This is a pretty intense rendition of the story, visceral in its descriptions and even sound effects at times, and I find it very entertaining. The producers of the drama, who otherwise portray the lead characters as devout Muslims, made the odd choice of adding a scene of drinking to excess - which is not part of the original story, and which would be very much out of character for such people - and that seems weird to me. But otherwise, I really enjoyed this. It's in two parts, and I'm sure it aired that way.

By the way, the two parts both start off identically, but then part two picks up where part one ended.

For several years, I had the great pleasure of listening to the radio show of Herb Kent, "The Cool Gent", on my way home from church on Sundays. He played great soul and R & B oldies, often with a good degree of comment and insight. It was his last gig in radio, and he worked right up until the Sunday before his death, at age 88, in 2016.

I knew that Kent had been a DJ in Chicago for a good long time. In fact, he worked in radio for 72 years.

Quite some time ago, I was lucky enough to find a reel featuring Herb Kent, a year into his 15 year stay at Chicago's WVON, in July of 1964. While this 27 minute recording is not a pristine aircheck at all (there are lots of edits, of the sort usually found on tapes made by people who mostly wanted the songs), it is, I'm guessing, a rare recording regardless, and does capture enough of Kent to make it worth sharing. 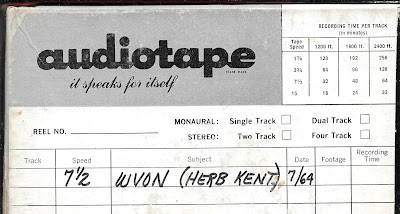 From the sublime to the ridiculous. I also recently digitized a tape containing three, back-to-back identical recordings of the same 11 minute aircheck, with the songs scooped out, done by someone named John Nelson at WXIV (The Big 14) in 1973. I believe this station was in Maine, based on some research I just did.

Not only is this a far, far worse era for hit music than that found in the preceding 1964 recording - I could only stomach a couple of these hits (were they not excised anyway) - Mr. Nelson's hackneyed performance is as unlistenable as the tunes we are thankfully spared. I assume he was going to chop these up into three tapes and mail them off for a hoped for better job somewhere. He might have waited until he had a chance to do a show while he didn't have a cold.

As promised last time around, today I am returning to the "Acetate of the Month" feature. With Thanksgiving a week away, and certain radio stations having long since turned on the Christmas Music, I thought I'd share this eight inch home recorded acetate, of what sounds like an adolescent boy (named Bill Duke), playing a piano solo of "White Christmas", near the end of 1948.

On the flip side, Bill Duke serenades us with "My Happiness" 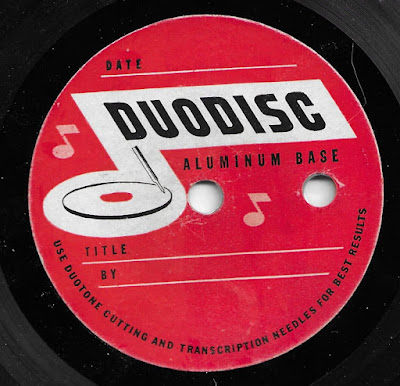 And finally, it's time for our "Very Short Reel". This is among the very shortest of those short reels, 34 seconds of John Dancy, in which he introduces what he's going to do, does a four second promo for a news special, in three slightly different styles, and says "okay".