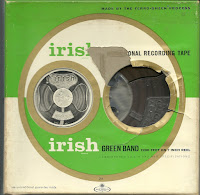 To start the sharing from my reel-to-reel collection on this site, here is the post I intended to simply be my next post at WFMU's Beware of the Blog. However, when I learned that the WFMU blog was to be closed to new posts (effective July 30th), I offered up a taste of some rare Dora Hall material instead, and decided to make this wonderful tape my first post here.

And this is indeed a wonderful tape. It dates to April 10th, 1959 (this is mentioned near the end of the recording), and features a 25 minute slice of a slumber party, during which the father of the girl hosting the party interviews the girls, orders them dinner and tries to get them to make jokes. There is something truly wonderful and exhilarating about the energy and exuberance captured here.

At the start of the recording, the girls identify themselves as all belonging to something called "The Golden Keys", although this is never explained. The host girl's father then begins interviewing each of the girls, all but one of which is 12 years old, and all of which are attending one of the local Catholic Schools (and will be for High School, as well). At one point, the man recording tapes himself making a jokey call to a local pizza place and orders mostaccioli for the girls (and do I possibly hear him call one of the people at the restaurant "dad"? - he is certainly very familiar with the folks at this establishment). This evening meal is ordered without meat sauce, but with a follow-up order of sausage pizza to be delivered at midnight. It is, of course, a Friday, and no one in this house would have eaten meat on a Friday. But as soon as midnight hits....

The adult in the room is relentless in requesting jokes or funny stories from the girls, who absolutely refuse to take part, until he offers a prize (which is never awarded). The moment he says that, the girls all get very excited, and talk over each other to tell jokes - there are four of them, and they certainly do reflect a simpler, more innocent era. Two of the jokes involve Catholic themes and the other two involve wordplay about butts.

There are so many little moments here to treasure, like the moment when the interviewer makes a joke about the fact that one of the girls' last names is "Beer". The girl in question laughs infectiously throughout her little interview, and then when he makes the joke, there's a moment of silence, and then another girl offers an embarrassed laugh. That's perhaps my favorite moment but the tape is loaded with little gems like that.

The tape ends with the interviewer wondering about their future, and hoping to play this tape back for the girls as they approach the end of High School in five years. How very different life must have been for these girls in the Spring of 1964, from what it was in the Spring of 1959.

This is the sort of tape I dream about finding - home recording, a single moment in time, life happening the way it does, all of that and so much more. I think maybe I like this so much because this was the sort of dad I was when my girls were this age, and I've continued to interact with their friends, as they've grown up and changed, on a very relaxed, peer level.

Perhaps someone out there can put together the names of the schools and figure out where this tape was made. I'd be interested in that, although I don't know that I have the time to actually make that effort.

Incidentally, this recording comes from a family which owned a bird which liked to make a lot of noise. For the rest of this tape - 20 minutes before this segment and another 15 minutes after it - they recorded the bird going through all of its noises, all the things it knew how to say, and ringing its bell. This is beyond tedious. For those who are interested in what I'm talking about, here is the five minutes which directly follows the slumber party, heard without edit of any sort. Enjoy!

UPDATE - 7/28/15: Two commenters have left information indicating beyond a doubt that this family, and the girls who were friends of the host, were living at the very southern edge of Chicago, most likely in or near the Roseland area. The details of their findings are in the comments. THANKS!! 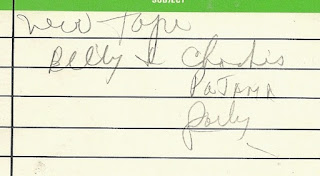